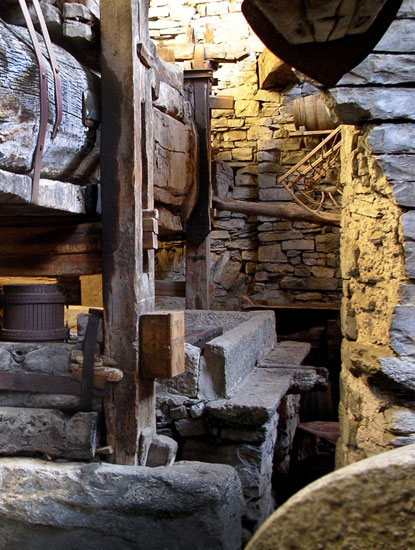 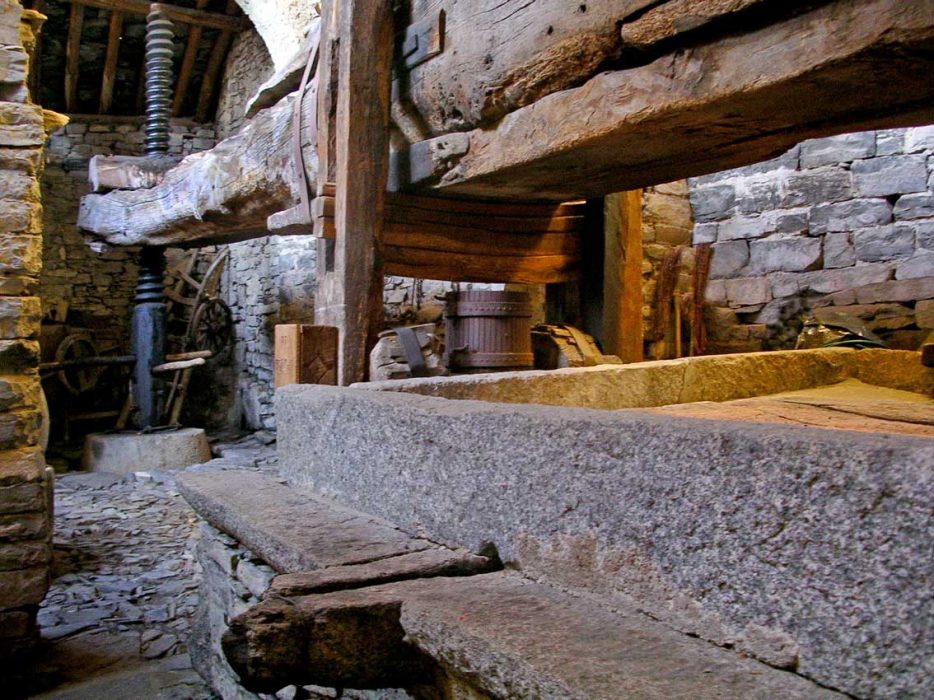 THE PRESSWINE
As evidence of the agricultural life of the past exists Palanzo a press monumental for marc, which dates from 1572 but still fully functional.
The press is operated for the annual festival held on the first Sunday in October. The press is a national monument.

The beam chestnut was made from a tree felled on site or nearby, on which was erected the present country of communal property, its size and its enormous weight would make it very difficult to travel a long way.
This suggests that the press has been one of the first things built in Palanzo, the narrow streets of the town would not allow the passage of the huge trunk.
The walls that enclose the press are distinguished from the others by the exposed stone laid almost dry openings in facades without windows and door in an old chestnut closed simply by an old iron bolt. Just slide the door opens revealing inside the giant fell asleep, the press.
Along with granite millstone that is in the same building, the press was also used for the crushing and pressing of the nuts (in small vat between the two anterior pillars) from which oil was extracted, and the remains of shells, the panel the beasts. The latest demonstration of how the rural economy left no room for waste.
Today, as the time anyone can get in and out of this space, there is no guardian or lock which prevents access. Everything is as it was 500 years ago: a social space which housed a public instrument, built for the community and used in turn by all households in the country.

Specifications
The height of the entire plant is of 3.8 meters, the structure is composed of an enormous beam chestnut wood with a length of 12 meters and from the circumference of 3 meters, pivoted on one side of a worm screw, more than 5 meters high and hand carved from a single trunk of walnut (more resistant chestnut) and Backing onto a large circular stone of granite weighing 3 tons that serves as a counterweight. On the other hand the trunk is supported by a frame that is the press that the press exerts up to 20 tons on the large granite basin.

The operation
The operation of this machine is very simple: at the base of the worm are stuck four sticks round which are nothing but levers on which women pushed to turn the screw that lowers the huge trunk on the final press.
The skins which were obtained from a first pressing of the grapes crushed with your feet and then left to soak for a few days. The procedure formed a savory sour wine called “bruschett”
The great plan of granite, on which is inscribed the date 1572, were placed the remaining dregs placed between two solid planks of wood, the upper thickened with small beams, the so-called “dormioni” and “suat” capable of forming the castle load other beams were inserted between the uprights to increase the load terminals of the lever which multiplied enormously human strength,
then through the discharge nozzle produced by pressing the monster was going to fill the vats.

Any cookies that may not be particularly necessary for the website to function and is used specifically to collect user personal data via analytics, ads, other embedded contents are termed as non-necessary cookies. It is mandatory to procure user consent prior to running these cookies on your website.